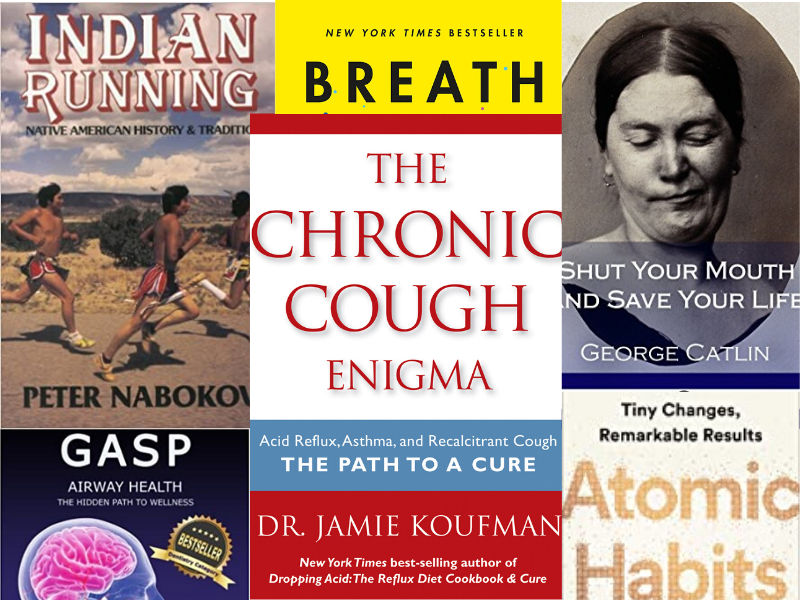 I am a total non-fiction fiend. Here are the eight books I hope to get through this summer!

The descriptions come straight from the Amazon summaries.

One of the books is out of copyright and I can send you a PDF copy. Just fill out this form if you want a copy of Shut Your Mouth and Save Your Life!

Jaws: The Story of A Hidden Epidemic by Dr. Sandra Kahn and Paul R. Ehrlich

There's a silent epidemic in western civilization, and it is right under our noses. Our jaws are getting smaller and our teeth crooked and crowded, creating not only aesthetic challenges but also difficulties with breathing. Modern orthodontics has persuaded us that braces and oral devices can correct these problems. While teeth can certainly be straightened, what about the underlying causes of this rapid shift in oral evolution and the health risks posed by obstructed airways?

The Airway-Centric Model prevents airway-centered disorders and sleep-disordered breathing to maintain mental and physical health. Learn how to recognize and correct both Gasp is about our airway, breathing and sleep. Problems can start at birth. Many premature babies are mouth breathers. A poorly structured and functioning airway leads to mouth breathing, snoring and sleep apnea; it can interfere with restorative sleep and ultimately damage the part of the brain called the prefrontal cortex, which controls executive function skills, attentiveness, anxiety and depression. Learn how to restore an ideal airway with early intervention, and where to go for help.

If you have confusing and unexplained breathing problems or your asthma has not responded to treatment, this book is for you. The Chronic Cough Enigma is written for people who have been coughing for months or years and cannot get useful answers from their doctors.More than 20 million Americans suffer from what is known as enigmatic chronic cough. This book provides insights from Dr. Jamie Koufman’s almost forty years of successfully managing thousands of long-suffering cough patients. Indeed, the typical chronic cough patient who comes to her office has been coughing for more than a decade. This book provides the many who suffer from chronic cough new and potentially life-changing information and the potential to be cured.

Nabakov’s story is about running. For essentially four million years, running meant survival. A Hopi man said, “Long ago when the Hopi had no sheep, no horses, no burros, they had to depend for game-capturing on their legs.” Running was also vital during conflicts — for chasing despised enemies, and for speedy exits when despised enemies came to visit. Running could be crucial for escaping the claws and jaws of man-eating predators, and other bummers. He noted that many civilizations used runners to deliver messages — Greeks, Romans, Chinese, Persians, Aztecs, Incas, Mayans. With fresh runners ready at stations placed several miles apart, messages could move through the Inca world at 150 miles (241 km) per day. In Greece, the “marathon” race refers to 490 B.C., when a soldier ran 25 miles (40 km) from Marathon to Athens, bringing news of the Athenian victory over the Persians — and then he collapsed from exhaustion and died.

Nabokov provides numerous accounts of Indian messengers traveling great distances. One ran 50 miles in six hours. A Mojave lad ran 200 miles (322 km) in 24 hours. Seven days a week, a Tarahumara man ran a 70 mile (112 km) route, carrying a heavy mailbag. Another report noted that some Tarahumara lads could run 170 miles (273 km) without stopping. Mexicans would hire them to capture wild horses, chasing them for two or three days, until the horses could run no more — while the men remained fresh. After running 15 miles (24 km), Zuni runners still had a slow heart rate and no signs of fatigue. Men in their seventies continued to have tremendous endurance, as well as low blood pressure.

Breath: The New Science of a Lost Art by James Nestor

There is nothing more essential to our health and well-being than breathing: take air in, let it out, repeat 25,000 times a day. Yet, as a species, humans have lost the ability to breathe correctly, with grave consequences. Journalist James Nestor travels the world to figure out what went wrong and how to fix it. The answers aren’t found in pulmonology labs, as we might expect, but in the muddy digs of ancient burial sites, secret Soviet facilities, New Jersey choir schools, and the smoggy streets of São Paulo. Nestor tracks down men and women exploring the hidden science behind ancient breathing practices like Pranayama, Sudarshan Kriya, and Tummo and teams up with pulmonary tinkerers to scientifically test long-held beliefs about how we breathe. Modern research is showing us that making even slight adjustments to the way we inhale and exhale can jump-start athletic performance; rejuvenate internal organs; halt snoring, asthma, and autoimmune disease; and even straighten scoliotic spines.

No matter your goals, Atomic Habits offers a proven framework for improving -- every day. James Clear, one of the world's leading experts on habit formation, reveals practical strategies that will teach you exactly how to form good habits, break bad ones, and master the tiny behaviors that lead to remarkable results. If you're having trouble changing your habits, the problem isn't you. The problem is your system. Bad habits repeat themselves again and again not because you don't want to change, but because you have the wrong system for change. You do not rise to the level of your goals. You fall to the level of your systems. Here, you'll get a proven system that can take you to new heights.

A Revolutionary Way of Thinking by Dr. Charles Krebs:

On the morning of January 22, 1982, Dr. Charles Krebs was a fit 35-year-old with a world of possibilities at his feet. By the evening he was a quadriplegic facing death or at least, a life sentence of physical and mental disability. Possessing both the knowledge of human anatomy and an indomitable will, Charles Krebs decided that whatever it took, he would walk again. In seeking the scientific explanation for his own miraculous recovery, Dr. Krebs synthesised the vast bounty of knowledge of the function of the human body and brain - from the 5,000 year old texts of the East to the very frontiers of Western neuroscience.

Shut Your Mouth and Save Your Life by George Catlin

Walking among and studying various Native American tribes in the 19th century, the author noticed that many of the elders possessed a serene and well-preserved appearance. The young members of the tribes seemed especially healthy, with an innate resistance to certain illnesses and congenital conditions. Seeing tribes' members sleeping, he noted that they all did so with closed mouths.

Catlin pondered whether this habit contributed to the physical vigor of the people, and investigated further. After venturing back to the towns of the Midwest, he attests to witnessing how terrible many people who had practiced mouth breathing throughout life appeared, and became deeply opposed to its practice. This book details how children and young people can be encouraged against mouth breathing, and notes how different the facial countenance appears between mouth-breathing people and nose breathers. This 1870 book is long out of copyright and I can share a free copy.

Enjoy your summer reading, whatever it is. Especially this year -- there's not as much to do outside our homes as usual.