What's The Difference Between Meditation And Breathing Retraining? 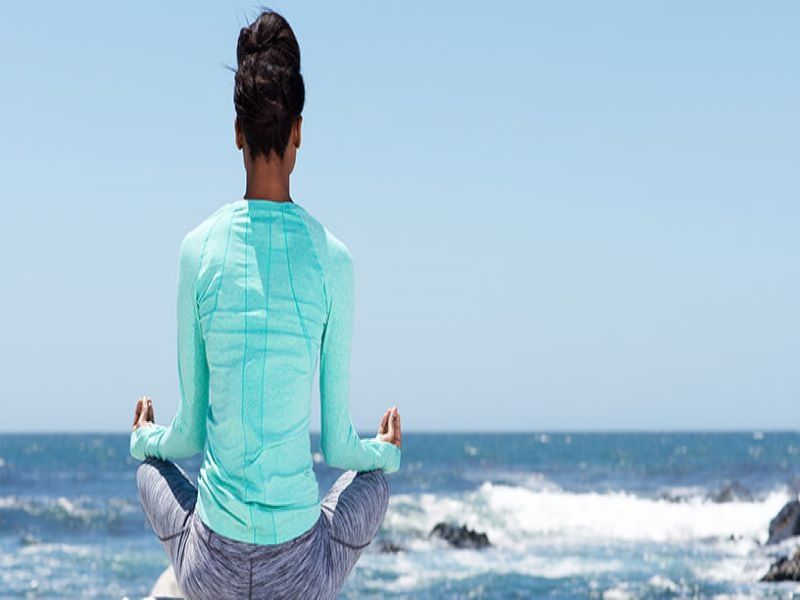 Almost 30 years ago, I learned to meditate in India. I had recently arrived by overland bus from Nepal with a big backpack and no return ticket, right before a skirmish between Hindus and Muslims quickly turned into a civil war. Luckily I happened to land in the calm, peaceful village of Bodh Gaya, where the Buddha is said to have become enlightened sitting under a Bodhi tree. For safety's sake, I stayed there six weeks and the only thing to do in this town was learn to meditate!

I had suffered from asthma and allergies since I was 4. Physically, it was tough to be there. Bodh Gaya is very dusty. At the time the Dalai Lama traveled there every year on pilgrimage, and I read that his allergies also acted up. That made me feel better somehow. I regularly visited the Ayurvedic and Tibetan medicine shops in town for relief. Months later when I saw a Western doctor on Embassy Row in New Delhi, I was diagnosed with walking pneumonia.

Upon my eventual return to my hometown of San Francisco, I plugged into the burgeoning, vibrant Bay Area meditation community. For years I did regular 10-day silent retreats, practicing Vipassana awareness meditation with my reliever inhaler usually reliably in my right pants pocket. I observed a lot of strong emotions and often needed to take a puff when my breathing got tight.

I was always interested in complementary health, but it would take me another 15 years before I was told about breathing retraining, namely the Buteyko Breathing Technique. My years doing Vipassana had taught me to sit with myself even if it were uncomfortable, but meditation and breathing retraining are otherwise totally different.

Breathing expert Dennis Lewis counts seven ways of working with breath. He recommends starting with "conscious breathing", otherwise known as meditation. There are thousands of meditation styles, and most of them are directed to training the mind as a spiritual discipline -- through awareness, concentration or visualization.

"Since most of us are almost totally unaware of our breathing, conscious breathing should be the first step in any self-directed program of breathing work," Lewis wrote in his book "Free Your Breath, Free Your Life".

Buddhist meditation techniques have been increasingly employed by mental-health professionals to help alleviate a variety of health conditions such as anxiety and depression.  In fact, Dr. Jon Kabat-Zinn developed Mindfulness Based Stress Reduction at the University of Massachusetts Medical Center in 1979 as a form of complementary medicine.

But breathing retraining falls under the category of "controlled breathing" because we're breathing a certain way to get a certain result. There are hundreds of breath-control exercises out there, from rebirthing and Yogic firebreath that transform a person's consciousness into an altered state through overbreathing, to Lamaze Breathing to ease childbirth, to Buteyko that reduces habitual over-breathing to a normal pattern.

The late Dr. Konstantin Buteyko developed his breathing method in the 1950s after observing that people with breathing-related illnesses like asthma, allergies and anxiety breathed two to three times more air than normal or necessary. His techniques gradually reduce breathing volume over time until a student's respiratory center is reset back to a healthy breathing pattern.

It’s not that different than taking a car in for its annual tune-up where the mechanic cleans up the engine and resets it to factory standards Our tools can be considered a no-frills fix-it strategy. It's not that complicated and if you "work the program" you will achieve the goals.

The late Ram Dass, a contemporary spiritual teacher who died in December 2019, is a famous example of someone who bridged the gap as a lifelong meditator who also engaged breathing retraining to improve his health.

He learned Hindu and Buddhist meditation in India in the 1960s and became instantly famous in the 1970s after the release of his seminal book "Be Here Now".

From Harvard professor to spiritual pilgrim, Ram Dass became a guru in his own right. So after he suffered a catastrophic stroke at age 66, it's not suprising that this experiential pioneer eventually looked to a breathing method for his healing.

Some 14 years after his stroke, he was still suffering greatly from its consequences, with breathing difficulties, sleep apnea, high blood pressure and other health issues, according to Sasha Yakovleva, founder of the Breathing Center in Colorado, who worked with him over Skype and wrote a blog post at the time about the experience.

After three months practicing the Buteyko Breathing Technique, "He was able to sleep without his sleep-apnea machine, his blood pressure became more normal, and his anxiety regarding his breathing was completely gone," Yakovleva wrote.. "Perhaps even more importantly for him was the fact that his speech became much more fluent and his memory improved considerably. All of this just because he reduced his over-breathing..."

Lewis, in recognizing the current age of stress and anxiety, noted in his pre-pandemic book that breath-control exercises are being used increasingly by the medical establishment since they can "sometimes function like medications in bringing about specific chemical, hormonal and physiological changes."

But breath-control exercises don't address the emotional reasons or patterns behind poor breathing -- so we often need breathing retraining AND mindfulness meditation! It's a great combination as long as you don't confuse the intention behind the two.